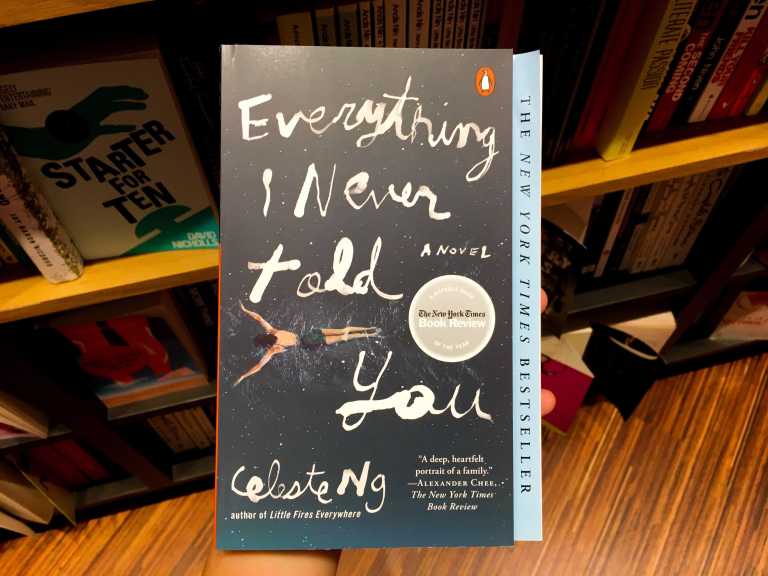 My experiences with post-colonial fiction centred around a nuclear family hasn’t been very good.

Without naming any, the ones I have come across usually present frustratingly shallow character and plot development- quality storytelling obviously prioritised beneath the post-colonial tenets they lay flat on the pages as if tickets into the post-colonial authors’ club.

Of course, being very real everyday experiences, these tenets- diaspora, divided cultural identity, racism, ostracism, torn loyalties, inferiority complex, white supremacy- can and ought to be explored with the multi-faceted eyeglass of fiction. “Art for art’s sake”, romantic as the notion sounds, is a wasteful use of fiction. Yet, workmanship should not be compromised by message; both should feature equally prominently in any work of art.

With this in mind, Celeste Ng’s Everything I Never Told You meets its post-colonial targets without lacking in good storytelling.

While China was never a colony, I choose to classify this novel as post-colonial as the themes it is frameworked by derive from the colonial period which imposed and proliferated the above-mentioned post-colonial themes. While these tensions may not play out as overtly in modern times, they still hold sway in much of the global consciousness. It is into this reservoir that Ng’s novel taps and explores.

Everything I Never Told You’s nucleus houses a mixed family of five in 1970s America. The father, James, is Chinese-American. Dark olive skinned with jet black hair, he has married blue-eyed, blond-haired Marilyn. Their favorite daughter has black hair with blue eyes, while their other two children, Nathan (Nath) and Hannah, look more like their father.

Separately the couple despise the stereotypes they are expected to identify with. James is painfully self-conscious of his outsider status as an ‘Oriental’ and carries his cultural background like a burden he tries desperately to shed. Marilyn tries again and again to cut the strings that tie her to the role of Betty Crocker housewife that she saw her mother as trapped in. Their desire to be Other- other than what they are- is ironically what causes them to fall for each other.

Their daughter, Lydia, becomes the living, breathing outlet of their personal insecurities. With her black hair and blue eyes, she is an oddity. Different enough for her mother, Marilyn plies her hopes and dreams on Lydia, urging her into a career in medicine. In her own desperate, failed scramble from the shackles of Betty Crocker, Marilyn is blind to the fact that Lydia wants this only to please her. White enough for her father, James’ lifelong pain of being Oriental, and therefore outsider, amongst Occidents translates into his need for Lydia to be popular with her peers. Her brother, the only one who can see through the facade Lydia puts up to please their parents, is desperate to leave the house to get away from being in Lydia’s shadow. The pressure of it all eventually drowns Lydia, figuratively and physically- this drowning the tragedy the novel opens with.

To me, what sets a post-colonial novel apart from being just another post-colonial novel is its willingness to deal with the stickier issues of being Other in a foreign land. Such novels admit at large that white supremacy is not so much imposed on the coloured other, but is also adopted by them. These subjects are deeply grateful at the chance to set themselves apart from their fellow countrymen back home. At the same time, they are painfully aware that they are yellow/brown/olive in a sea of white and they try their best to over-compromise for this. James does so by having not a trace of his local accent, marrying what he sees as a typical white woman and by almost forcing his children to act, talk, look like and be, insiders.

Caught between their desire to be different from the race they were born to and never being able to fully integrate into the host country, they are at once torn between an inferiority complex and an imposter syndrome.

Yet, when what James’ sees as his American house of cards topples over, he finds comfort in a fellow Asian American: he has an affair with his assistant Louisa. James is convinced that she is the kind of person he should have been with from the start; Louisa’s body the physical representation of Orientalism. In a logical reversal of Edward Said’s Orientalism theories, James finds in Louisa the painful, yet comforting definition of what he is not, and what he should have been. He lives as if with a lie he knows that for his whole marriage is at the corner of his eye, one he refuses to look at. With Louisa, he finally chooses to face that lie head on, and it is ironically in this dishonest honesty that he is able to find rest.

In a world where race is treated sometimes as a ‘delicate’ topic, it is frustrating and almost dishonest when racial issues are romanticised. It is a way of saying: “here, I am acknowledging them”, while at the same time excusing the author/speaker from delving deeper and getting their hands dirty. As a POC and post colonial subject myself, I always find it refreshing when other people of color are willing to lay bare (Ng’s James does so physically) the ugly side of tensions the post colonial subject experiences.

This story is a quick and easy read. Yet, it is reminiscent of Mark Twain’s signature: Everything I Never Told You is in its accessibility an invitation to deeper conversation. An invitation to be honest with each other, at least for the few hours we spend reading it.

3 thoughts on “Everything I Never Told You: An Invitation to Dive a Little Deeper”