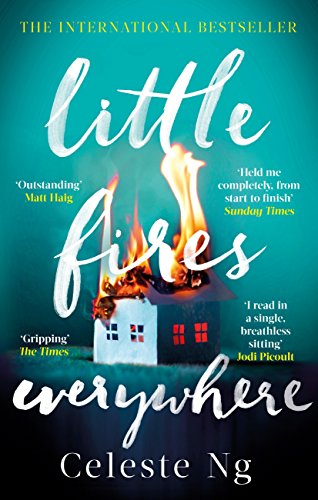 Little Fires Everywhere is written in the same nostalgic, wistful prose about family and community. Again, Ng probes the tenets of race, stability, secrecy and subversion of the status quo.

Little Fires Everywhere is about a ‘perfect’ community in Shaker Heights in Cleveland Ohio. Everyone in Shaker Heights follows the rules, dots their i’s and crosses their t’s. Everything is neat, ordered and as it should be. Except for one Mia Warren, a roving photographer artist who’s never quite coloured within the lines. She stays in a rental owned by the Richardsons, a typical Shaker family with one not-so-typical daughter, Izzy.

Upsetting the Richardson’s well-ordered lines, their son Moody first brings Mia’s daughter Pearl into their lives by befriending her. She comes from a different background, adding flavour to Moody and the Richardson’s lives. Then one day, Mrs. Richardson’s friend the McCulloughs adopt a Chinese American baby. All goes well until Mia intervenes on the baby’s birth mother’s behalf, provoking a custody battle that splits the town in two. Mrs. Richardson reacts more violently than even she herself expects to, as a sort of revenge on Mia. Her revenge is obsessive and goes deeper than is normal.

In my upcoming post, I will be discussing both Mia and Pearl’s juxtaposition with the Shaker community as well as the full implications of Mrs. Richardson’s revenge. The one thing that stands out to me most starkly is how a novel that seeks to critique stereotypical structures ironically panders to many of them itself. Whether or not this adherence to the very thing it critiques is deliberate is an argument that is worth pursuing.

It makes for interesting discussion: an author needs to be aware of and perhaps even inundated by these stereotypes in order to critique them from a well-educated standpoint. However, is this inundation so thorough that the author cannot escape them herself? This irony is not only seen in novels, but in many sectors of socio-political discourse. How can you critique something—an issue, an event—unless you are well-versed enough in it? How can you critique that very thing objectively, then, mired in it as you are? Can there be educated objectivity without first subjectivity? Is there ever real objectivity then?

It is also interesting to ponder the addition of the topic of race into a custody battle. Is it necessary and how does it complicate things? Ng certainly (ignorantly?) groups together two minorities into one—racial minority and educational/sociological minority. Is this grouping supposed to make a statement or is it merely laziness? How common is such groupings? Does that emphasise the “unimportance” of such minority groups?

If you can, do pick up a copy of this book and join in the discussion on my upcoming post as where I will be discussing these poignant issues!

Happy reading and have a good weekend everyone!